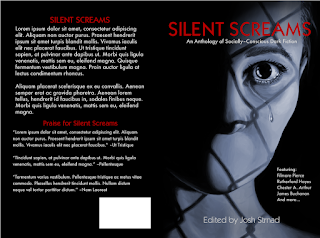 Silent Screams is a new anthology, available October 31 for Kindle and shortly thereafter in print.  Bluntly put, it kicks ass.

The book is an unusual one thematically, as its hook is “socially conscious dark fiction”—which is to say, horror and near-horror stories with an emphasis on disadvantaged protagonists.  On the surface, this would put it outside of my comfort zone both as a writer and reader.  I have no particular fondness for horror in any medium (I find it generally gratuitous and artless and it very rarely scares me) and, while I care about social justice conceptually, I am accustomed to seeing issues of “social consciousness” approached in a preachy and adversarial manner that turns me off.

I was therefore surprised when the editors of the work elected to accept my contribution to the anthology, “A Boy and a Soldier.”  My story is a further fleshing-out of Fabrice’s journey to freedom in the company of his child-soldier companions and disembodied advisor, as first chronicled in "The Commander".  This tale is more adult in tone, focuses more extensively on Fabrice’s human allies and adversaries, and goes to darker places.  I wouldn’t categorize it as full-on horror so much as straightforward fiction with dark elements.

I don’t know why the Fabrice stuff sells so much more readily than the rest of my work; if I did know, I’d be a better writer.  Perhaps it’s because it’s more action-forward that most of what I write.  Perhaps it’s because Fabrice is a more immediately sympathetic and admirable protagonist than most of the conflicted, messed up people through whom I speak.  Perhaps the voice is more distinctive, or perhaps we Americans just love us some cultural appropriation.  In any case, it’s a solid story of which I’m proud.

And then I read the whole collection, and I’ll just be damned if my story isn’t maybe the weakest thing in it.

These are STRONG stories, my people.  Rich, visceral, imaginative, well-crafted and emotionally resonant, right across the board.  My initial concerns about the genre approach and possible political angling of the book were blown right out of the water.  These aren’t just horror stories, but stories of every type and style—everything from lit fic to heroic fantasy, seasoned with dark elements but not overwhelmed by the desire to “get dark”.  They’re enjoyable reads in which the nasty side makes you think, as opposed to grossing you out.

Nor are these predictable defenses of progressive orthodoxy against the usual cultural straw-men—there’s a variety of perspectives included, everything from standard feminist to stridently anti-abortion.  The stories have points to make, but they’re never artless in doing so.  The touch of the authors is deft, the allegories clear but subtle, the victims worthy of sympathy regardless of one’s position on the political compass.  If you come away from this screaming about “SJWs”, I daresay the problem is with you, not with the book.

Parenthetically, I will add for the benefit of the high school speech instructors among my readers that there is some very intriguing prose/DI material herein.

I can’t guarantee you’ll love everything in the book, but I’ll bet you respect damn near all of it.  And there’s enough really good writing here that predicting your individual favorite is probably next to impossible.  For me personally, three pieces stand out.

-“THE MAIDEN WITH THE CLOCKWORK HANDS” by Rachel Strnad.  This tale, apparently set in an alternative 19th century, places a monster hunter from the Pacific Northwest and his motley companions aboard a most unconventional vessel, and turns them loose in search of two quarries—a man with a fondness for silence, and a beast that makes Moby Dick seem tame.  In doing so, it creates a subgenre all its own, a sort of paranormal-infused steampunk.  I’m not overly fond of paranormal OR steampunk, yet Strnad’s world is much better than the sum of its parts; it’s utterly captivating, revealing its wonders and the mechanics of its technological, natural, and pseudo-magical systems in stages.


-“A PRESENTATION TO THE IMPERIAL SOCIETY OF MANCERS” by Stephen S. Power.  Clinical detachment is a prerequisite to successful science and to human progress generally, yet to sever ourselves from our emotions makes us in some respects less than human.  It’s from this dichotomy that the traditional take on the “mad scientist” springs.  Here, the author yanks us in an unexpected direction, creating a world of heroic fantasy into which technology is being slowly introduced, ala Terry Pratchett.  Pratchett, however, never dreamed up a narrator as soul-sick as the twisted bastard Power offers as the author of this scientific journal submission.  Utterly revolting, and disturbingly insightful.

Oh, sweet Jesus.  Where to begin with this thing?

It’s about a mobster who visits a restaurant.  More than that I will not reveal, because it would spoil the “fun”, and because I’d rather not think about it any more than I have to.  Suffice to say that, over the course of eighteen pages, I twice had to get up from my computer and go do something else for a while.  This is not a story for the sensitive or the squeamish.  I am neither, and this story WRECKED me.

I hesitate to say that a story in a small-market collection is the best piece of horror fiction I’ve ever read.  That doesn’t seem like it ought to be true.  But I can’t recall another ever having as visceral an effect on me.

Shane Simmons, you sick f*ck.  You’ll win awards for this.

There’s more, folks.  There’s much, much more.  Twenty-six stories in all, each with a unique style and a particular way of providing a voice to society’s victims.  Every cent you spend on this anthology goes straight to the Salvation Army, to help some of those victims pick themselves back up again.  But believe me, it’s primarily for your own sake that you’ll want to buy this one.  It’s great.
Posted by Steve DuBois at 8:50 PM No comments: