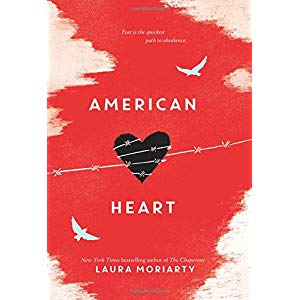 Laura Moriarity’s American Heart—a dystopian YA novel which takes place in a near-future of Muslim internment, and which retells Huckleberry Finn as the story of a teenage girl trying to help an Iranian refugee reach Canada--has been the target of one of the more spectacularly ignorant campaigns in the annals of political correctness.

If you're not already familiar with the controversy, go ahead and read that link. And maybe also the New Yorker's rather savage take-down of Kirkus' behavior. I'll wait here.

Young adult literature is near and dear to my own heart, and was crucial to my own development. I’m deeply aggravated to see it turned into a political football. And yet there’s some utility in what happened to American Heart. Beyond a shadow of a doubt, the Streisand Effect was in play here, as the campaign against the book brought it to the attention of thousands who would not otherwise have heard of it. As one of those thousands, I’ve been waiting for a while for a library copy to come available. This week, I finally had the opportunity to read it for myself.

I find American Heart to be quality, well-plotted YA.  I was surprised to find that the action beats were my favorite part of the book. Sarah-Mary is a resourceful protagonist; there were numerous episodes in which I found myself wondering "how are they going to get out of this one?" and was subsequently satisfied by the resolution. These moments keep the pages turning. Moriarty also has a special gift for portraying anticipatory dread--those dark, ugly moments in which the fate of the characters rests in the hands of a secondary character who may or may not know their secret, or who does know and may or may not choose to help them.

Of the public criticisms of the book, the one which seems to be most rooted in truth is the claim that Sadaf lacks agency. Indeed she does. We live in a world which frequently denies agency to people. I don't think that sanitizing that reality would improve the book. Nor would this be a better novel if the author were to disrupt the structure of the plot in order to create moments in which Sadaf becomes an action heroine. She makes the best use she can of the moments of agency she has, which serves the author's argument that we all should.

As a perspective character, Sarah-Mary is believably the product of her experiences and influences, and also of core qualities which exist in a place beyond society's reach. We watch as that core drives her towards a new set of experiences which lead her to develop new values. The transformation of the misnamed "Chloe" into Sadaf occurs not as an external reality, but within the scope of Sarah-Mary's perspective. This is her story, even if some readers wish it wasn't, and the exploration of her perspective has literary value. Critics of the author's perspective choice are asking for a different book rather than evaluating the one they're reading.

My own major criticism is the ending, which is driven by a deus ex machina involving a secondary character who would better have been left out entirely. Protagonists this clever deserved the opportunity to complete their journey under their own steam--or at least to have made their way to the location of Sadaf and Sarah-Mary's parting on their own.

So four stars for the book as a whole. And then subtract one for the ending. And then go grab that star that Kirkus took away because they chose to value the opinion of a baying mob over that of their hand-chosen Own Voices reviewer, and give it back to American Heart, which deserves it.


Posted by Steve DuBois at 8:08 AM No comments: 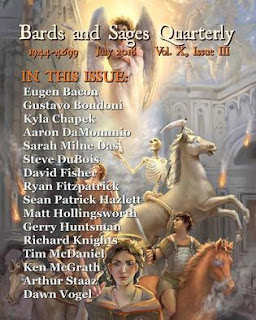 "All That Glitters" is a mere 1000 words long and features the most original story idea I've ever had. It's available now in the July issue of Bards and Sages Quarterly.

As the title suggests, it's not gold. But it has other merits. Keep your mind on the money, and the money on your mind...

(Edit:  the link now takes you to the Amazon page for the issue)
Posted by Steve DuBois at 8:49 PM No comments:

"Don" and the perils of accidental plagiarism

I'm very proud to have my short story "Don" in the June edition of Andromeda Spaceways. The original version of the story was drafted almost three years ago, and was inspired by the research I did into wind energy generation as a high school debate coach, as well as my lifelong fondness for the Broadway musical "Man of La Mancha". The story retells Don Quixote as the story of a rogue climatologist, and offers a sci-fi take on his struggle against the windmills.

It was a fun story to write. Any author learns to love the moment at which they find themselves in possession of a wholly original idea--those visits from the muse are few and far between, and inspire a white-hot burst of writing energy as one pours the idea out onto paper.

So the story emerged, and was revised, and revised again, and submitted, and submitted again, as stories are. I never doubted it would land somewhere; the idea was just too much fun not to see print.

And then, about six months after writing the story, I ran across this XKCD cartoon: 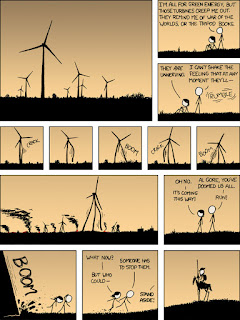 This provoked no small amount of disappointment in me (NOOOOO! MY ORIGINAL IDEAAAAA!!!) as well as a mini-crisis of conscience. Because my inspirations for the story, and my research into its plot points, were exactly as I said.

But, on the other hand...I do read XKCD on occasion. And this strip tracks the plot of the story pretty closely. While I had no specific recollection of reading this particular strip, it seems very likely to me that it influenced me when I wrote the story, at least at a subconscious level. Which raises the question: is it possible to be a plagiarist without intending to be one?

I've served as a reviewer of other people's stories at a couple of sites, and I occasionally run across examples of plot points or even character names which I've run into previously in mass-market fiction. I'm not talking about Tolkein pastiches, so much; I'm referring more to things like referring to your main character as "the Bloodless," ala Patrick Rothfuss. And researching the issue, I discovered it happens to professional authors fairly frequently--and that some of them go so far as to avoid reading within their genre for fear of "idea contamination."

I have, in the past, re-read an old favorite only to find a section of text that's suspiciously close to something I've written myself--I've inadvertently taken copy from Douglas Adams, Terry Pratchett, Harry Turtledove, and others. Whenever I've come across an instance of this, I've removed the relevant text from my own work. Using another author's words, intentionally or unintentionally, is plagiarism, full stop.

Story and plot concepts fall into a more ambiguous space. For instance: both my YA novel Axis of Eternity and my short story "Monsters in Heaven" involve an extraplanetary afterlife not altogether dissimilar to the one Phillip Jose Farmer explored in his Riverworld novels. AoE also involves a plot concept which had been previously explored by Ivan Stang, inventor of the Church of the SubGenius, and which I later discovered as the central concept of still another author's story in Broadswords and Blasters. Where this sort of thing is concerned, I think some allowance has to be made for good faith on the part of the author, provided that he or she is acknowledging his or her influences and giving credit where it's due. And there's also going to be some instances of two different people just having the same idea. Great minds think alike, and occasionally, even my mind meanders into those realms normally reserved for the truly talented.

In the end, I elected not to kill the story, and the editors, having been made aware of the issue, elected not to kill it either. I do think, though, that it's appropriate to give xkcd's Randall Patrick Munroe a shout-out and a thank you for his subliminal inspiration. His stuff is so great that it ends up making my stuff better. And if he's reading this, I hope he won't have me killed.
Posted by Steve DuBois at 7:59 PM No comments: