An Appreciation of Matthew X. Gomez's "God in Black Iron and Other Stories" 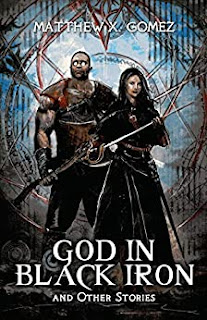 DISCLOSURE:  The author has, in his capacity as an editor, purchased and pubished my work in the past.

New Pulp features a number of gifted writers and—for now, at least—not as many enthusiastic readers. This results in an inevitable competition for attention. In some cases a writer who works to bring other contributors’ work to the public eye will pay an unfair price, as they’ll have less chance to bring attention to their own work.

Such is the case, I think, for Matthew X. Gomez. Widely known as half of the editorial team behind the celebrated periodical Broadswords and Blasters, he has also been carving out a niche of his own through stories published in Pulp Modern, Storyhack, Switchblade, and elsewhere. His richly entertaining first collection, God in Black Iron and Other Stories, demonstrates that Gomez’s gifts as a writer deserve wider acclaim.

I’ve previously encountered some of these stories in isolation, and I’d come to appreciate Gomez’s skills in terms of plotcraft and ability to establish a sense of place. Seeing his work gathered together has a different feel. Patterns emerge, and additional skills surface.

First, there’s the sheer genre range on display. From classic high fantasy to modern grimdark, light horror to weird western, cyberpunk and steampunk and whatever the hell “The Mead Trap” is, Gomez never comes across as an interloper treading cautiously in new terrain; his extensive familiarity with genre conventions not only to walk sure-footed down familiar paths, but also to make judgments as to when to most effectively break the rules and subvert reader expectations. “Comes a Slayer,” for instance, has the imaginative setting and trappings of magic you would expect in any dragon-hunt, but throws those features into sharp relief with a protagonist who’s all hard-headed practicality, obsessed with outfitting and provisioning, shunning a shining white charger in favor of a mule which he pointedly refuses to name. Paradoxically, a dragon hunter who cares nothing for style points makes for a more stylistic story.

I have also been underrating Gomez’s talent for portraying violence, and the attention he pays to detail in doing so. His characters go to war with pistols and polearms and crossbows and beer steins and axes and stun batons and scimitars and sixguns and spears both short and long and fists both fleshy and cybernetic. There are few "swords" here; instead, there are gladii, and zweihanders, and rapiers, and broadswords, and each is wielded with distinctive purpose. It is immediately apparent in every instance that Gomez has done his homework. His combatants—both heroic and villainous--have chosen their tools with care, they are familiar with the details of their use, and that their fighting styles are crafted to suit their strengths. There are no “hit points” here; each blow is calculated with anatomical purpose.  Every feint and positional gambit matters. Mistakes are punished, and expertise doesn’t grant you iron skin; Gomez’s heroes get hurt. This is handcrafted, artisanal violence, and it’s preferable to watching bladed supermen wade unscathed through scores of jumpsuited henchmen, or watching an expert marksman pick off targets while enemy stormtroopers fill the air with errant ammo (well, usually preferable; more on that later). I read this book immediately after Nicholas Eames’ Bloody Rose. And hell, I like Eames, for a variety of reasons. But strictly in terms of the texture of combat, I have no qualms about saying Gomez is better.

In terms of individual stories: “Crystal, Brass and Copper” was one of the best stories I read in 2018, either in or out of the confines of New Pulp, and if I’m picking the standout story in terms of craft, I think this is probably it.  The Saladin Ahmed-meets-steampunk aesthetic works brilliantly, but I also think this one features two of the author’s standout characters in the thief Bahar, who navigates believably from tragedy through trauma to triumph, and the inventor Ardeshir, who may or may not have a heart of gold, but is certainly capable of fashioning one on consignment. One of the best things you can say of a story is that it leaves you asking “and then what happened?” at the close. CBC has that effect.  I’d be glad of more stories involving either character, though Ardeshir seems to me to offer particularly interesting opportunities.

But “best” is not necessarily “favorite,” and my pick in that category has to be the final story, “Ashton and Marcus: The Mead Trap”, in which a couple of inter-dimensional roustabouts seek a break from their chaotic lifestyles, and don’t find it. I’ve spoken earlier about Gomez’s usual careful attention to the mechanics of violence and the importance of tactics. Ashton and Marcus represent the author reflecting on that talent, tossing it over his shoulder with a shrug, and Getting His Mayhem On.

And I’ve said I’m not generally a fan of that, but I think it might be more fair to say that it’s something I think an author has to earn. By all means, give me Bruce Campbell in Army of Darkness, wading waist-deep into undead hordes, but give me Evil Dead 2 first, so I can see the price he paid to wind up with that chainsaw prosthetic. Matthew X Gomez spends this whole book showing me an understanding of relationships, nuance, and battle planning. So, yeah, at the end, it’s OK for him to stuff Sam Raimi and Joe Lansdale and Larry Correia and HP Lovecraft into a blender and serve them to me in a bucket with a little paper umbrella on top. It’s fun, damnit. Ashton and Marcus’s interdimensional travel, and probable inability to learn from their mistakes, offers potentially infinite replay value. I could see this becoming a franchise. Think Hap and Leonard meets Bill and Ted.

So, yeah, you’ve got a tall stack of stuff to read and a limited amount of time to spend in fantasy universes at this point.  But I do believe that God in Black Iron and Other Stories is good enough that you’ll find your time well spent.  Here is a New Pulp author worthy of your attention.

Posted by Steve DuBois at 2:02 PM No comments: