Bartolo Colon is a Big Fat Doomed Tub of Goo

I’ve been making fun of fat people lately.  Specifically, I’ve been making fun of New York Mets relief pitcher Bartolo Colon.  A 42-year-old Dominican hurler, Mr. Colon follows in the footsteps of David Wells, Terry Forster, and numerous others who’ve exploited the low cardiovascular requirements of the position to forge a successful career for himself.  Very successful, in fact; he’s earned more than $90 million over 20 years in the majors, and has won near-universal respect for his control artistry, professionalism, and above all for his sense of humor about his body type.


Unfortunately for Mr. Colon, he is doomed.  He is pitching against my Kansas City Royals in the World Series, and like all Royals opponents, his Mets are fated to take an early lead, turn the game over to their inferior bullpen, and watch their ankles be chewed away beneath them by our relentless barrage of singles hitters.  It’s nothing personal; just the business of winning championships.

Sports fandom is a social phenomenon—always has been—and these days, manifests itself largely through the social media.  It has become customary for fan bases to talk relentless smack on their opponents:


On the opposing fans:


You can't blame them for leaving early. Nobody wants to miss a Tuesday night out in Toronto. #TakeTheCrown
— Steve DuBois (@Twitlysium) October 20, 2015

On their own team:

Batter interference on a SB. WP with the pitcher batting. RF loses track of outs. I think someone spiked the dugout water cooler with LSD.
— Steve DuBois (@Twitlysium) November 1, 2015

WE HAVE ACHIEVED HUMANITY'S GREATEST DREAM: WE ARE IMMUNE TO THE CONSEQUENCES OF OUR OWN STUPIDITY. #TakeTheCrown
— Steve DuBois (@Twitlysium) October 28, 2015

On the the length of the games:

Neither of these franchises has ever won a World Series Game 1. Perhaps neither ever will.
— Steve DuBois (@Twitlysium) October 28, 2015

I can't go to bed before this game is over, because I may be called upon to pitch in it.
— Eric McHenry (@HenryMcEric) October 28, 2015


On the umpires and broadcasters:

I wish I was right about anything as consistently as Harold Reynolds is wrong about everything.
— Steve DuBois (@Twitlysium) October 24, 2015


Do you send DuBois back out to watch the 12th? Can't expect top teaching performance from him tomorrow if you do...
— Steve DuBois (@Twitlysium) October 28, 2015

And, above all else, on Bartolo Colon:

Some of these tweets, as you see, have won me a wider audience.  Some of them have won me direct criticism from internet trolls—speech police, people whom I’ve never met coming out of the woodwork to accuse me of “fat shaming”.  In the words of Bartolo Colon the morning after his trip to the Mexican buffet, "You wouldn't believe the blowback I got on this."

A friend of mine asserts that this is not fat shaming, but rather "an appreciation of the magnificence that is Bartolo."  I think this may be a distinction without a difference.  I am using Bartolo Colon’s status as an overweight person—a mark of societal disfavor and discrimination—as the basis for humor.  100% guilty.  And one of my strengths is that I am attentive to criticism, regardless of the source.  I consider it, and I reflect on my own behavior.

There are certainly places one doesn’t go as a sports fan.  One doesn’t isolate on personal tragedies, like Missouri basketball fans chanting “PLO” at Steve Kerr the week after his father died in a terror bombing.  One doesn’t use race or sexual orientation as a basis for mockery.  Nor are an athlete’s childhood economic circumstances fair game—the KU fans who mocked an underperforming Jamari Traylor for having been homeless are just scum, full stop.

And weight-based ridicule, especially in the media, CAN have consequences.  Kids have killed themselves over this sort of thing.  Am I a monster?  A troglodyte?  A troll?  Do I owe a vote of thanks to the white knights who rode to rescue Bartolo from my cruel words?  I’ve thought about it.  And the conclusion I’ve come to is:  in this particular instance, the people seeking to police everyone else's online speech are the problem, and they need to go piss up a rope.

As acknowledged above, fat shaming CAN be a very bad thing.  But can is not must.  But as with any other form of criticism, one has to attend to the nature of the relationship between the critic and the target.  And I think the argument that I am cyberbullying Bartolo Colon is a very, very tough sell.  It is not difficult to distinguish between the harm done to a thirteen-year-old girl by her peers, on the one hand, and the harm done to a public figure with an $11 million dollar salary on the other.  It is important to worry about the former.  It is silly to worry about the latter.

Yet the contents of my inbox suggests that there really are people who can’t tell the difference—or, perhaps, who think that the real problem is the standard set by my discourse; that tolerance of fat shaming in one forum sets a new norm that legitimizes tolerance of fat shaming in all fora.  I suspect these people would not accept the same sort of “slippery slope” argument were it to be fostered by, say, Republicans about nationalized health insurance, or the NRA about gun control.  I don’t think it’s a sincere objection.  I think it’s an argument of convenience, an excuse to play white knight.

Also, there is this. 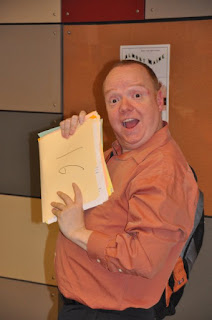 I’m not a small man.


BMI is a bad statistic, so I won’t use it.  But there’s no disputing that I’m unhealthily overweight—probably by about 25% of my total body mass, a far higher percentage than Mr. Colon.  I suffer from attendant health issues, including hypertension and sleep apnea.  I struggle and fail to do better in terms of healthy eating and exercise.

One might, I suppose, call me a hypocrite, or expect me to be more sympathetic to Mr. Colon’s condition.  One MIGHT—if one were an outsider accustomed to thinking of fat people as fragile porcelain mice in need of protection from hurtful words.  One MIGHT—if one believed fat people lacked all agency, were incapable of standing up for themselves (as opposed to being incapable of standing up BY themselves).  One MIGHT, if one thought people like me and Mr. Colon were in need of rescue.

But one would not want to think those things.  Because if one did, one would be a patronizing little turd.  One’s attempt to police my speech would be a deeply insulting incursion into the community that Mr. Colon and I share.  And within that community, people like me and Mr. Colon enjoy the freedom to make fun of ourselves, and of one another.   We express our struggles in our own way, and when other people push past the invisible line that separates humor from hurt, WE tell them to stop.  WE do this.  We do not rely on outsiders to do it for us, because we are not children in need of protection.  We are big boys now.  Some of us, in fact, are very big boys indeed.

And so we would say to those who would police “fat shaming” as a matter of course and regardless of context:  thank you for your concern, and for your compassion.  Sincerely.  Thanks for recognizing that this can be a real problem.  Thanks for working to eliminate real, meaningful discrimination in this area.  Thanks for rushing to the defense of young people, and those who genuinely can’t defend themselves.  But we are not those who cannot defend themselves.  We are not those who need your protection.  So please direct those attentions elsewhere.  And where your attempts to police our speech towards ONE ANOTHER are concerned, please direct those attentions straight up your own scrawny ass.

We're gonna make Bartolo cry tonight.  But it won't be because he's fat.  No it will be because he and his teammates are bad at baseball, and will be exposed as such before a national television audience.  And if our online commentary ancillary to the game may pertain to Bartolo Colon's formidable jowls, or Jacob DeGrom's uncanny resemblance to a cocker spaniel, or David Murphy's continuing quest to bring the Secret Of Making Fire to his clan, well...truly, that's all in the game.