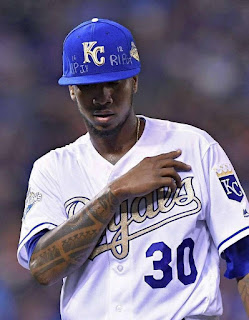 Celebrity deaths became something of a national fetish last year.  I remember taking to social media to mock the phenomenon, accusing the mourners of concern trolling, only to be stopped short the next day by the death of Richard Adams, who wrote Watership Down, a book I greatly valued as an adolescent.

I do think that some celebrity deaths, however, are objectively more tragic than others.  Those who die young, even as a result of bad decisions, never have the opportunity to develop their talents to the fullest extent, or to outgrow the traits that bring them pain.  Yordano Ventura, who died today at the age of 25, was one such individual.  In his short life, he demonstrated loyalty, compassion, and tremendous talent.  Having been brought together by the Kansas City Royals’ two recent pennant drives--both of which are owed in no small part to Ventura's contributions—the community mourns him today.

Kansas City has lost our share of athletic celebrities over the years; maybe a bit more than our share.  Joe Delaney was the one that impacted me most profoundly—I was 11 at the time—but there have been others.  Derrick Thomas.  Mack Lee Hill.  Dick Howser.

We all mourn in different ways.  I mourn, in part, by writing.  My failed YA novel, Axis of Eternity—yes, I’m aware that sounds like an off-brand cologne—involves a world in which humans both famous and obscure are reborn on a new world shorn of their earthly memories.  One of the more enjoyable aspects of writing the book was the opportunity to load it up with some of my favorite minor historical figures.  Buck O’Neill, a Kansas City baseball legend, plays a prominent supporting role.  Harriet Tubman’s there, too.  Angus McCaskill.  Others.

In one of my favorite chapters, a supporting character introduces the protagonist to the game of soccer.  His memory of the game’s rules isn’t quite perfect, but this in no way diminishes his enthusiasm.  I took the opportunity to load up the match with several of my favorite deceased Kansas City sports figures, along with some other personages of minor import.  Read it here, if you wish.  Kansas City sports fans of a certain age might recognize a few old friends.

Should I ever get around to redrafting the thing, I’m sure the scene’ll involve a cameo appearance by a firey young man known to the citizens of Haven as “Angry Yordano.”