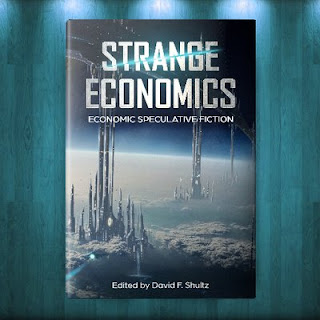 I’m fortunate to be included in Strange Economics.  Edited and produced by Canadian writer David Schultz, it’s a speculative fiction collection in which every story applies at least one economic concept in fantasy or science fiction settings. It’s unmistakably a highbrow piece of work, and as such, it tends to reward attentive, educated, and intelligent readers.

As a writer, I am prone to an unhealthy attitude towards anthologies.  The competitive side of my personality tends to take over, and I wind up comparing my work to the other works included.  This never takes me anywhere pleasant.  If I judge my work to be inferior to that of the other authors included, I wonder if I’m dragging the overall product down; whether I was the last one in the door; whether they’re all snickering at me behind my back.  If I feel my work is among the better pieces included, I wonder whether I couldn’t have sold it somewhere more prestigious.  Long story short: I am a cantankerous, neurotic bastard, and can't be dealt with.

My contribution to this particular work is entitled “The Rule of Three.”  Originally drafted shortly after Terry Pratchett’s death as a tribute piece, it explores a world in which witchcraft has recently come out of the closet as a legitimate scientific discipline with economic and industrial applications—and in particular, the attempts of middle-aged divorcee Hecate Bowersgrove to keep her small-business alchemy shop afloat while under siege from big-box rivals.  It’s a fun piece, but I can't say that it's likely to radically expand anyone's intellectual horizons.

This makes it something of an odd duck where this particular anthology is concerned, because there are some very profound, weighty pieces herein.  For instance:  the anthology opens with Neil James Hudson’s “The Slow Bomb”, which explores the oft-considered question “what is the monetary value of a human life” through a particularly grim and imaginative thought experiment.  Batting third is “Have Icthyosaur, Will Travel” by DK Latta, a sort of Jurassic World for smart people which takes seriously the economic and environmental implications of dropping a bunch of captive dinosaurs into the world.  And in between these two expertly crafted and deeply considered pieces is my own story, featuring the zany madcap antics of imps and trolls.

While I initially felt a bit beyond my depth, the story has been well received to this point, and in seeing that, I think I’m coming to a better understanding of how an editor might choose to construct an anthology of this kind.  Yes, you need strong, serious pieces of work to serve as the weight-bearing elements of the structure.  But even fans of that style of writing (and I’m a huge sucker for stories that test the limits of my thinking) will occasionally want to set down the burden for a while and enjoy something a little lighter. To that end, there’s stories like mine, and also M James’s “The Slurm,” a laugh-out-loud take on monster slaying with a playful style that’s entirely particular to the author, and entirely delightful.

Again, though, I’m mostly into the stuff that makes me think.  And man alive, there’s a LOT of that stuff in here.  I can’t restrain myself to my usual habit of highlighting three particular favorites, because there’s just so many; in addition to the stories listed above, there’s also Jack Waddell’s “The Short Soul,” in which the gods of death cope with the scarcity issues brought on by humans achieving clinical immortality; JM Templet’s “Shape, Size, Color and Lustre,” which introduces a South American-flavored mythology which is unfamiliar to me and may be entirely original, and Karl Dandenell’s “Supply and Demand Among the Sidhe,” in which Queen Titania’s trade embargo sparks a flurry of innovation by the fantastic denizens of her faerie realm.  The line-by-line writing in this last work is absolutely elite and the story itself worthy of contention for the highest awards in the genre.

And even THAT’s not my favorite thing in the anthology, because Jo Linsday Walton’s afterword essay is clever enough, and insightful enough, to leave us mere fiction writers deep in the shade.  I suspect that the essay also contains clues regarding Ms. Walton's involvement in the anthology in a different role, though others may find that take a bit rich.

In the end, in spite of my anthology-related neuroses, inclusion in Strange Economics is honor enough for me to set impostor syndrome aside and just enjoy the ride.  There’s some hardcore writers and thinkers here, and it’s a genuine pleasure to be seen in their company.  I’m glad to have invested myself in it, and I think many of you will want to buy in as well.